Around 320 organisations participated in this first General Assembly, formally adopting CoARA’s governance documents, rules of procedure, and code of conduct. Importantly, the Assembly elected the coalition’s Steering Board, who are tasked with taking the initiative forwards and maintaining the momentum established.

Professor Rianne Letschert, Rector of the University of Maastricht newly elected Chair of CoARA, thanked members for their support and trust. She congratulated her fellow Steering Board members and expressed her gratitude to the Science Europe, European University Association, and the European Commission for their work in drafting the agreement and developing the framework for CoARA leading up to the Constitutive Assembly.
At the assembly, the preliminary workplan and budget for the coalition were also approved and the European Science Foundation (ESF)-Science Connect was formally appointed as the CoARA Secretariat.

Science Europe is delighted that 29 of our 40 Member Organisations have signed the Agreement and committed to the Coalition. In addition, Doctor Lidia Borrell-Damián Science Europe Secretary General, and Professor Matthias Koenig Vice-President of the German Research Foundation and Governing Board member of Science Europe were elected as members of the Steering Board.

CoARA brings together a wide range of organisations involved in research assessment and their respective associations, including research funding and performing organisations, national/regional authorities and agencies on assessment, learned societies and researcher organisations. Within the coalition, signatories of the Agreement on Reforming Research Assessment will come together to facilitate information exchange and mutual learning between all those willing to improve research assessment practices and to enable systemic reform on the basis of the commitments in the Agreement.

Science Europe is committed to supporting the Coalition, as one of its members. The Science Europe Working Group on Research Assessment has already discussed initial ideas for building complementarities and synergies between their work and that the soon to be established CoARA Working Groups.

In handing over the duties of the Secretariat from Science Europe, the European University Association, and the European Commission to the European Science Foundation, President of Science Europe, Marc Schiltz highlighted: “We all wanted the Agreement to be strong, to be bold, to be usable for the reform of research assessment. I would never have expected we would get so many CoARA members in such a short time. The rest of the world is looking at us, we have a unique chance to reflect on what is it that we value in research.”

We look forward to being a part of the first steps of the Coalition in the new year, and we will continue to encourage research organisations to consider and sign the Agreement at: https://coara.eu/sign. 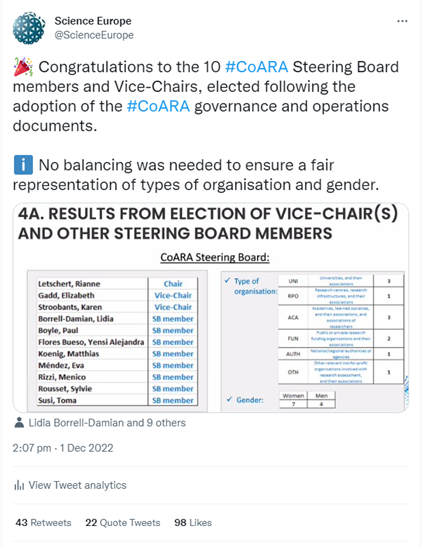 The Coalition for Advancing Research Assessment (CoARA) is now up and running since its official launch on 1st December at the Constitutive Assembly meeting of the Coalition after a year for intense drafting and development where Science Europe played a central role in both the Drafting Team and Interim Secretariat.

Every year, autumn is the period where participants of the Global Research Council (GRC) meet at regional level to prepare the world-wide discussion that takes place the following spring.

The Constitutive Assembly of the Coalition for Advancing Research Assessment (CoARA) took place on 1 December 2022. The Assembly, which brought together the organisations that signed the Agreement for Reforming Research Assessment by 17 November and have confirmed membership in the coalition, officially launched CoARA and decided on the terms of its governance and operations.

CoARA: next steps for the coalition

An extensive co-creation exercise throughout the first half of 2022 that gathered the interests and perspectives of +350 organisations from over 40 countries led to the publication of an Agreement on Reforming Research Assessment on 20 July.

Science Europe, the European University Association, and Dr Karen Stroobants, supported by the European Commission, present an agreement on the reform of research assessment, the result of over six months of co-creation with more than 350 organisations from over 40 countries.

Agreement on the Reform of Research Assessment almost reached

The European reform of research assessment initiative is taking shape, and the Reform of Research Assessment Agreement is almost final. Soon, the process of establishing a coalition before the end of 2022 will start.